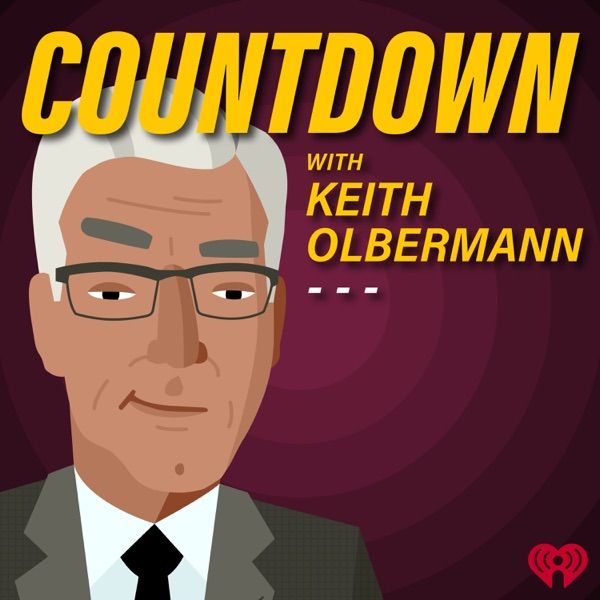 “Countdown With Keith Olbermann,” the landmark news and commentary program that reordered the world of cable news, returns as a daily podcast. Olbermann’s daily news-driven mix will include his trademark “Special Comment” political analysis, the tongue-in-cheek “Worst Persons In The World” segment, and his timeless readings from the works of the immortal James Thurber. The man who turned SportsCenter into a cultural phenomenon will broaden the content to include a daily sports segment, a daily call for help for a suffering dog, and a remarkable series of anecdotes covering a career that stretched from covering the 1980 Olympic Miracle on Ice a month after his 21st birthday, to anchoring the 2009 Presidential Inauguration and the 2009 Super Bowl pre-game show in a span of just twelve days, to rejoining ESPN as a “rookie” baseball play-by-play man at the age of 59. 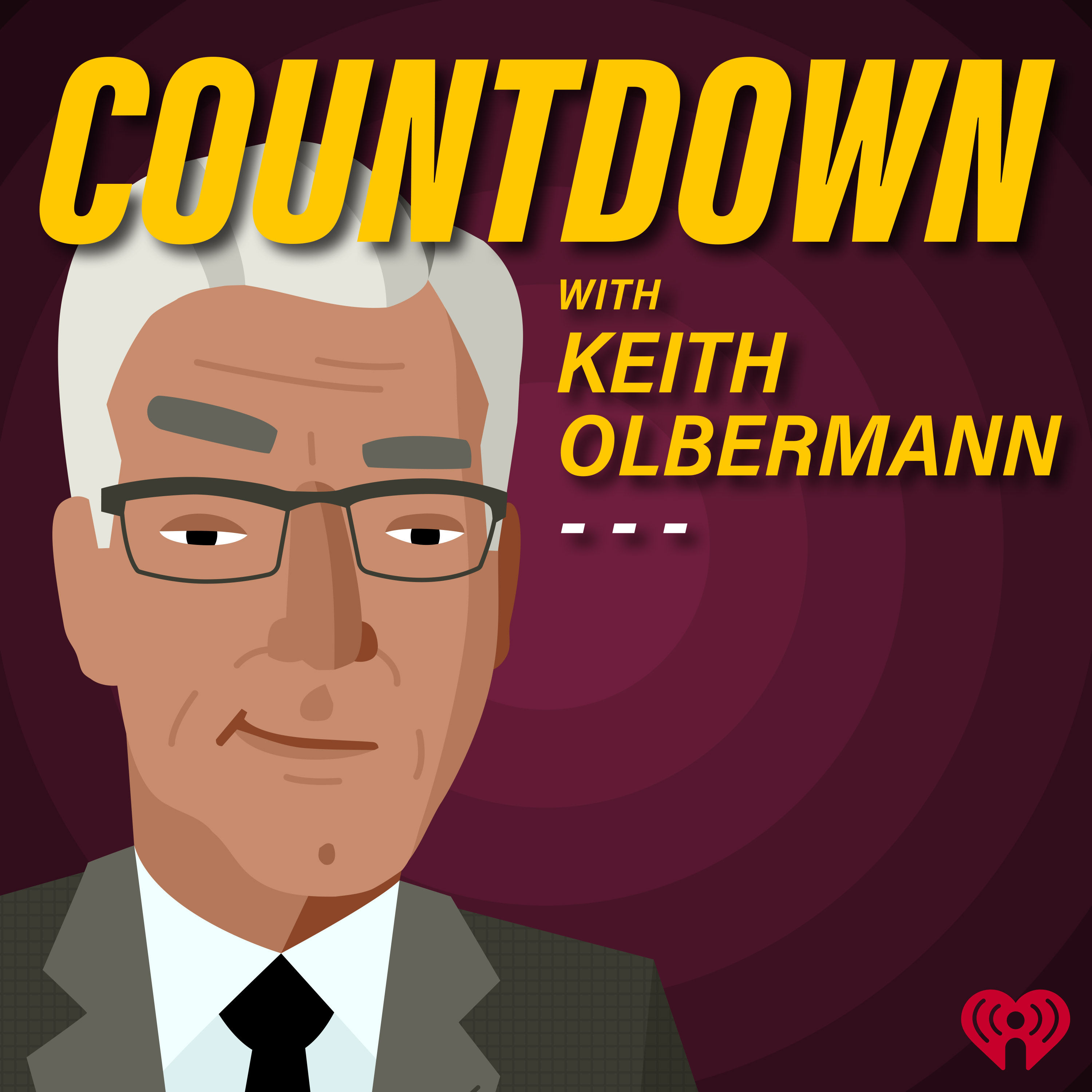 A BLOCK: (0:00) Of Roy Cohn, The Rosenberg Executions, and Donald Trump (2:45) Officials predict "many months" before the Trump Theft story "plays out" (5:30) Every possible angle of "Classification/Declassification" is hyped, except Charlie Savage's note that none of the laws Trump may have broken "turn on whether information was deemed to be unclassified" (6:01) In one week Trump's Cover-Up Team produced 31 DIFFERENT excuses why Trump did nothing wrong, and I review them (11:10) This obscures the only real debate: do you pursue Trump for a 10-year sentence per count, or a 20-year sentence, because we can't do to him what Cohn did to Julius and Ethel Rosenberg.

B BLOCK (13:12) Every Dog Has Its Day: Cheer Bear (14:49) Postscripts To The News: The IRS coming to kill you nonsense; The Boeberts (Again).(16:50) When I met Salman Rushdie and wondered if he had enough security (19:25) How come nobody's talking about baseball's new steroid scandal? If the man the game attempted to market as the new face of the sport, who was "here to change the game" is suspended until next year, it's more than Fernando Tatis who is in trouble (23:55) The Norwegian Government, Ted Cruz and Kevin McCarthy vie for honors as The Worst Persons In The World.

C BLOCK (29:31) Things I Promised Not To Tell: 45 years ago Tuesday, Elvis Presley died. It is little remembered, but the day he shuffled off, he was due to start a concert tour in the Northeast. For his scheduled appearance in Syracuse, Elvis's promoters bought commercial time on every radio station within an hour of the arena. That included the Cornell radio station I was running at the time, and I did the commercial! (35:33) The actual Elvis concert commercial I did, from WVBR-FM, Ithaca, New York, from August 1977 - when I was 18 years old (37:17) What happened on our station's main newscast the moment Elvis died (39:20) ELVIS OWES ME MONEY. Fin.

A BLOCK (00:00) Stealing nuclear documents has previously been prosecuted in this country as a Capital crime (2:10) Washington Post's scoop on FBI seeking "classified documents relating to nuclear weapons" at Mar-A-Lago (2:42) Another report: FBI found dozens of Top Secret/Sensitive Compartmented documents (3:52) Attorney General wants to unseal warrant; in late announcement Trump says he acquiesces (4:14) The Assistant Attorney General for National Security attended Garland's announcement (4:25) What changed in June that made authorities act? (8:38) Republicans respond. Have you no sense of decency, at long last?

B BLOCK (13:57) Every Dog Has Its Day (15:50) Postscripts To The News: Attack on Cincinnati FBI, more Herschel Walker nonsense, USPS screw-ups, first glimmer of hope for the return of Brittney Griner and Paul Whelan (19:08) Sports: Bill Russell's number retired by NBA (19:54) I was the first TV reporter to do a story on the book that became the movie "Field of Dreams" and the Field of Dreams Game is everything the book and movie criticized (24:00) The Worst Persons In The World: Scott Adams, The Lincoln Project, Charlie Kirk.

C BLOCK (26:54) The weekly reading from the immortal humorist James Thurber. In this episode, from his book "My Life And Hard Times," his most famous short story: The Night The Bed Fell.

A BLOCK: (00:00) Donald Trump has his own Deep Throat! (3:05) There's a Trump Flipped Snitch Mole Rat Informant who tipped off the FBI and it has Trump asking if somebody's wearing a WIRE (5:08) Lordy there are TAPES: the FBI has Mar-A-Lago Surveillance video - but how much? (6:35) Like we need more: somebody snitched on the snitch! (7:41) I suspect all this is why Trump is so quiet, and why he hasn't even cherry-picked the self-serving parts of the Search Warrant and released them, as he has every right to do (8:40) Shamelessly he invokes the 5th Amendment more than 400 times in a 'Question And Non-Answer Session' with the NY AG breaking his record of 97 in the Ivana Divorce deposition AND WE ALL KNOW WHAT HAPPENED TO HER.

B BLOCK: (14:26) Postscripts To The News: Historians tell Biden it's like 1860 or 1940 and Democracy is imperiled (I could've told him that. YOU could've told him that (15:33) They're going to give Herschel Walker WHAT before his Senate debate? (18:15) Seen the video of the baseball player sliding into 3rd Base and his phone flying out of his pocket? Baseball has a long history of pockets full of stuff that didn't belong there: a lit cigar, a vial of cocaine, and sandpaper and emery boards! (22:17) The Worst Persons In The World! Competing: Senator Tim Scott, The Trump Non-Campaign Campaign, and The Washington Post.

C BLOCK: (25:44) Things I Promised Not To Tell is about the day of my final showdown with Chuck Todd (27:40) We were original participants in a DC-based Fantasy Football League founded in 2008 (28:54) I was the victim when Chuck violated a key rule of the secret league and the league actually took away one of his draft choices! (30:30) He tries to get me to tell my ex, Katy Tur, some bad NBC news so he didn't have to (32:21) Chuck claims on-air that Alexandria Ocasio-Cortez referred to "Nazi Concentration Camps" even though she never referenced Nazis, Hitler, or Germany. I protest to him and he doesn't know the British started Concentration Camps (35:15) On the eve of the 12th Fantasy Football season I decide I just can't stand another year dealing with him and I leave the league (36:00) Chuck finds out I've quit and barrages me with emails ending with "Don't make me care about you." (39:45) I'll talk to you Friday!

Why did Trump's immediately allege the FBI planted evidence IF NOBODY HAS YET SEEN THE EVIDENCE?

(00:00) THE A BLOCK: It's obvious: you don't say "anything damning they find was planted" unless you know they're going to find stuff that's damning! (02:12) Why hasn't anybody just said "Trump's innocent"? (03:51) Sean Hannity with an unexpected update on the pee tape (05:12) Trump is suspiciously quiet! (7:15) Democrats have a chance to campaign on the GOP wanting to "Defund The Police" (8:11) And what's this about the FBI grabbing Rep. Scott Perry's phone?

(10:54) THE B BLOCK: Every Dog Has Its Day: Please meet Ox (12:45) POSTSCRIPTS TO THE NEWS: Primary results, Facebook helps prosecute a 17-year old for having an abortion, Rudy loses again. (16:31) WORLD OF WIDE SPORTS: Serena! and (18:28) Marshawn Lynch reaches the Mugshot Hall of Fame. (19:45) THE WORST PERSONS IN THE WORLD: Alex Jones, Me, and Mrs. Jones and Dave Barstool Portnoy and Andrew Cuomo vie for the title.

(23:14) THINGS I PROMISED NOT TO TELL (26:45) 10 years since Aaron Sorkin put a quote of my Dad's into the mouth of Jeff Daniels' character on "Newsroom" and every woman I ever dated contacted me (28:44) I meet Josh Charles, who played me in Sorkin's "Sports Night" and we swap tales of woe (30:25) At Stephen Colbert's Comedy Central finale I meet Jeff Daniels and we swap the truth - and take a selfie!

Cheese it! It's the Feds! When Trump is quoted as asking why "his" generals aren't more like Hitler's generals were and that calls up his 32 years of publicly praising the Nazis, and that's NOT the TOP Trump story that day, it's been a big day! The full implications of the raid at Mar-A-Lago, the possibility the DOJ is going for an 18 USC Code 2071(b) case against Trump, the chances of getting him disqualified from again holding federal office, the dismissal of the charge that the investigation is unprecedented, and the hilarious reaction from the right threatening "war." We'll also review The New Yorker story about Trump and Hitler, and why reporters keep burying important stories to save them for books years later. Plus Sports, Worst Persons In The World, and in Things I Promised Not To Tell: The day I did absolutely no work and broke the greatest story of my career - the trade of hockey superstar Wayne Gretzky.