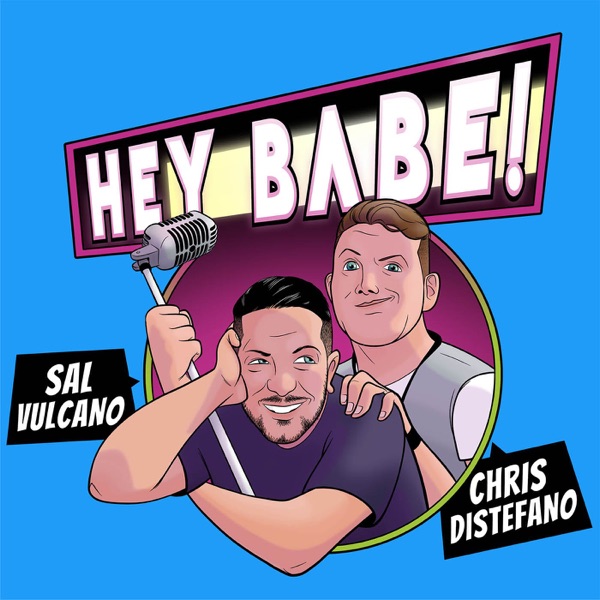 Hey Babe! is a podcast where comedians Chris Distefano and Sal Vulcano share stories and have fun. Let your hair down & come hang out with the BABES!

This episode the Babes talk Chris' dad acting insane to Phil Collins at a Knicks game. Why did Phil Collins have Easter candy at the Knicks game?! Chris' dad embarrassed him when he got them court side seats. Chris and Sal BOMB at basketball games. Sal watched LeBron James play in person! Chris comes to terms with his age and how he is older than LeBron James. Sal realizes he's older than EVERYONE in the NFL. SHOUT OUT TOM BRADY! SHOUT OUT THE SUPER BOWL. Sal has never had a Cinnabon. IT'S ALL ABOUT THE cinnaMON MON. Sal gets embarrassed at Madison Square Garden in front of a sold out crowd. Sal is now PRINCE HERB. The babes talk about the latest Impractical Jokers punishment that is going to haunt Sal for YEARS. Chris talks about how when he was a kid he tried to get his tongue pierced. Is it cool for a guy to have his belly button pierced. Sal talks about the time he pranked his friend as a teenager. Make your friends think you're skipping the check and run out of the restaurant but secretly pay the bill. Jesus was paleo right? What did people eat back then. Chris talks about the time he was served pasta at a wedding and it had cigarette ash in it. Sal talks about the time he witnessed a guest order a pizza to a wedding. Ever call someone by the wrong name? Shout out Dave Attell he's a legend! Who would win in a fight Ronald McDonald or the King from Burger King? Sal and Chris finally kiss.

Rate us on iTunes! Follow us on social media @HeyBabePod