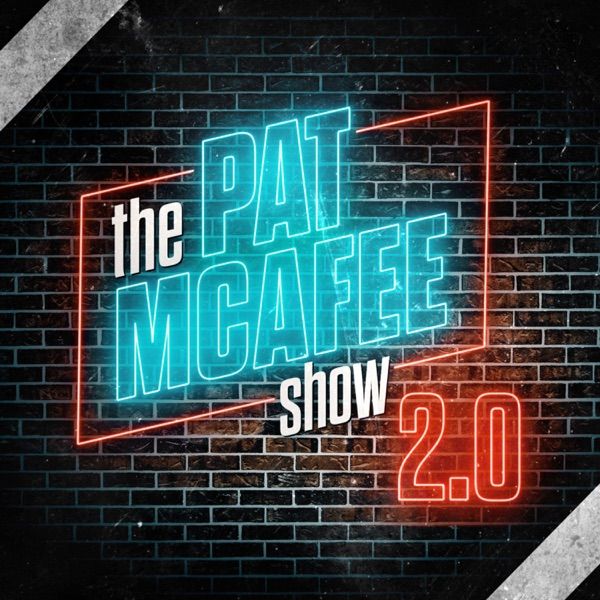 On The Pat McAfee Show 2.0, Pat McAfee and his friends deliver one of a kind opinions that won't be heard anywhere else. Pat, who played in two Pro Bowls during his eight-year NFL career, brings a fresh take on sports and entertainment to listeners and fans. He is known for speaking his mind and is both relatable and refreshing. His player’s insight, electric storytelling, and robust sense of humor have helped him build a huge and loyal fan base with more than 3 million social media followers. Presented by FanDuel, The Pat McAfee Show 2.0 promises to inform, intrigue, and entertain. Cheers.

On today's show Pat, Darius Butler, AJ Hawk, and the boys chat about tonight's Thursday Night Football game between the Colts and Broncos, how it's kind of a must win game for both teams, what the Colts need to do to get rolling, if the Broncos offense can pick things up, and tonight's Super Boost exclusively available on FanDuel. Joining the progrum to chat about everything happening in the NBA as we prepare for the start of the regular season including the Ime Udoka situation, Draymond Green and Jordan Poole throwing punches at practice, LeBron wanting to be the majority owner of a team in Vegas, and much more is NBA Insider for Stadium and The Athletic, Shams Charania (31:32-54:43). Later, the voice of College Football, and now color commentator for Thursday Night Football on Amazon, Kirk Herbstreit joins the progrum to chat about tonight's Thursday Night Football game in Denver, what the biggest difference between calling a college game and NFL game has been, his thoughts on this weekend's College GameDay in Kansas, and more (1:40:03-2:03:26). Make sure you subscribe to youtube.com/thepatmcafeeshow to watch the show. We appreciate the hell out of all you. See you tomorrow, cheers.

On today’s show, Pat, AJ Hawk, Darius Butler, and the boys chat about Mike Tomlin’s comments about Von Miller being an alien and a scientist, Kenny Pickett officially being named a starter, Odell Beckham Jr. responding to Aaron Rodgers’ comments yesterday on Aaron Rodgers Tuesday, and look ahead to tomorrow night’s Thursday Night Football game between the Colts and Broncos. Joining the progrum is the Head Coach of the Philadelphia Eagles, the only remaining undefeated Head Coach in the NFL this season, Nick Sirianni, to chat about what dawg mentality means to him, why he feels like he’s the perfect guy to coach in Philly, not feeling the pressure to be anyone but himself as a Head Coach, he meets our Coach Sirianni, and much more (31:47-54:03). Later, Super Bowl Champion, former GM of the Cleveland Browns, author, host of the GM Shuffle Podcast, and friend of the show, Michael Lombardi joins the progrum to chat about what’s pissing him off in the NFL this season, what he likes right now, why he thinks Quarterback play is not great right now, and ultimately, who he thinks is going to win the Super Bowl (1:26:54-1:53:41). Make sure you subscribe to youtube.com/thepatmcafeeshow to watch the show. We appreciate the hell out of all you. See you tomorrow, cheers.

On today's show, Pat, AJ Hawk, and the boys are joined by AQ Shipley LIVE from the ThunderDome to recap last night's Monday Night Football game between the Rams and 49ers, how the 49ers look incredible after looking terrible last week, if the Rams are in trouble, Nick Bosa having an incredible night, and much much more. Joining the progrum is friend of the show, All-Pro, starting Safety for the Buffalo Bills, Jordan Poyer to chat about the Bills big win over the Ravens on Sunday, his pursuit of breaking the record for most interceptions in a single season, what it's like preparing to play against Lamar Jackson, and much more (29:49-39:57). Later, joining the progrum as he does every Tuesday, is Quarterback of the Green Bay Packers, Aaron Rodgers to chat about the big win over the Patriots in overtime, preparing to go to London for the first time to play the Giants, his thoughts on OBJ saying he's special and that he'd potentially like to play with him, what makes playing against Bill Belichick so difficult, the next installment in the Aaron Rodgers Book Club, and much more (1:50:29-2:28:53). Make sure you subscribe to youtube.com/thepatmcafeeshow to watch the show. We appreciate the hell out of all you. See you tomorrow, cheers.

On today's show, Pat, AJ Hawk, and the boys overreact to everything that happened in week 4 of the NFL season including the Bills getting a massive win over the Ravens with a clutch drive from Josh Allen, the Packers and Patriots going down to the wire with the Packers getting a win in Overtime, if the Colts are dead, Kenny Pickett getting his first game action in Pittsburgh despite the Steelers suffering a tough loss to Zach Wilson and the Jets, some overreactions from around the internet, the biggest injury news that we need to be aware of as we preview a huge Monday Night Football tilt between the Rams and 49ers, and much more. Joining the progrum to chat about all the different injuries that will impact teams around the league, news on Dak Prescott's return to Dallas, the independent neurologist getting fired in Miami by the NFLPA, and more is NFL Network Senior Insider, Ian Rapoport (1:29:19-1:44:19). Make sure you subscribe to youtube.com/thepatmcafeeshow to watch the show. We appreciate the hell out of all you. Enjoy Monday Night Football tonight, we'll see you tomorrow for Aaron Rodgers Tuesday, cheers.

On today's show, Pat, joins AJ Hawk and the boys LIVE from Clemson, South Carolina and College GameDay as they recap last night's Thursday Night Football game between the Dolphins and the Bengals, and all the fallout surrounding Tua's scary injury, whether he should've been playing in the first place, what this all means going forward, and if the Bengals are actually back after an impressive win before they go through the entire week 4 slate of games and make their picks against the spread (1:15:29-1:38:36). Later, 18th overall pick of the 2006 NFL Draft, 8 year NFL veteran at Linebacker, the man who saved college football, General Bob Carpenter joins the show to chat about this weekend's NFL and college football slate, his thoughts on former teammate MCDC, what's different about playing for the Patriots, what he would say to Tom Cruise if he had the opportunity to meet him, his thoughts on the Brett Favre situation, and much more (1:43:53-2:05:33). Make sure you subscribe to youtube.com/thepatmcafeeshow to watch the show, and tune in to ESPN2 on Saturday night at 7:30 PM EST to watch the Pat McAfee Show college football simulcast. We appreciate the hell out of all you.  We'll see you on Overreaction Monday, cheers.